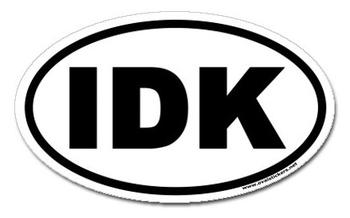 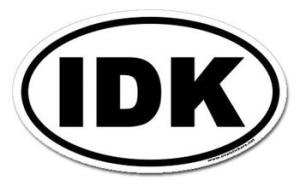 For years, I just couldn’t say it. I don’t know why, but I would say anything except those dreaded three words. Three simple words: “I don’t know.”  Why are they so difficult to say?  It’s because we have to admit a measure of ignorance.  It’s humbling.  But I want to encourage you to not fear saying IDK any more.  Saying “I Don’t Know” is very powerful.  To admit that you don’t know is to empower yourself because:

IDK is not threatening to others. Pride is abrasive while humility is disarming.  When you admit you don’t know, you disarm others’ defenses. Most people (whether they realize it or not) operate on the philosophy of ‘Law to the proud; grace to the humble.’  Saying “I don’t know” allows you a certain grace afforded usually to rookies.

IDK invites collaboration and builds teamwork.  If you’re interested in doing something great – then you know it can’t be done alone. Saying “I don’t know” gets the ball rolling to really make a difference and do something big!

IDK criques the status quo. When approached the right way, “I Don’t Know” queries deep into the heart of big ideas.  It merits honest answers and opens the doors of understanding.

I am proud to say that I’m more humble than I used to be (*sarcasm) – and I readily admit that “I don’t know.”  And I’m excited to say that it’s paying off!  What about you?  Have you ever had trouble saying “I don’t know” or is that something you are good at?

One thought on “Empowering Reasons to Say IDK”