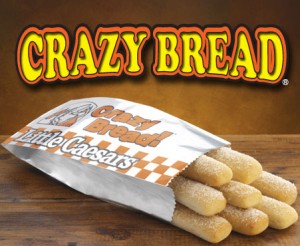 Recently, I went into Little Caesar’s needing 5-6 pizzas and saw a sign reading: “Free Crazy Bread!” The thought consumed my attention (thoughts) & captivated my affection (desires). I wanted free Crazy Bread – that’s all I could think about. I pray that this message is to you what that sign was to me…

In Luke 24:13-33,we see the same ‘Crazy Bread’ moment happening to two of Christ’s disciples…
v19 – “What things?” Their opinion of Him was high: Prophet, powerful
BUT not high enough about WHO He was – “they” (circumstances took over) …
BUT they were confused about WHAT he would do – v21 – “about to redeem”
In v25-27, Jesus basically says: You’re not getting it, it’s not sinking in.
“slow of heart” – to grasp/apprehend at the core/root
Head Knowledge, Temporal Trust – but not Eternal, Life-Giving Faith

Can you imagine hearing the original story read by the Author Himself (as intended!)?

I imagine Jesus spoke of Eden & the Fall of mankind (Genesis 3:15)
Man’s sin brought a Curse – as the curse was pronounced to Serpent…
1st Promise of the Gospel – the Proto-Evangelion
Prophecy – re: a virgin, Mary (her seed) & the event of ultimate victory: CROSS
**They called him a powerful Prophet – but He was more! He was God!
In a matter of hours, they would understand. They would get the proof.
**If we are going to be true Christians – not in name only, we must believe in Jesus as God
Can I trust God completely? Even when my situation seems to contradict his nature?
(Job “though He slay me” / Abraham laid his son on altar / loss / loneliness…)
**YES! If Jesus is God, then we must trust Him – in WHO He is – His power, sovereignty…

I imagine Jesus spoke of the Israelites wandering in wilderness – maybe even about the time when poisonous snakes were biting the Jews and many were dying (Numb. 21:8-9)
Imagery is clear… Sin’s bite is poisonous, painful, deadly! (a consequence)
Answer: Look & Live! Simple…
Jesus referenced it – John 3:14 – it represented Him
Why snake? rep of curse – Gal. 3:13
Why bronze? rep of judgment – 2 Cor. 5:21 – substitutionary death (lamb)
**Remember that his disciples said: “we were hoping He was the One about to redeem…”
They were trusting Jesus for a political kingdom and redemption
**If we are going to be true Christians – not in name only, we must trust in what Jesus did!
We cannot be guilty of know about the cross & not appropriating it.
This is a truth that cannot stay in our head – it must lodge in our heart.
**YES! If Jesus died for us, then we must trust Him – in WHAT He did – as enough for us

And then maybe Jesus took them to the last page of their Bible, the OT (Malachi 4:1-5), to remind them of His Return… Often called “The Day of the Lord” – His return will be in Power & Authority
He came once as a lamb to a slaughter, but next time as a Lion to claim His throne
He came once as a man under authority, next time as Judge of all the earth
**This is who they were expecting! They didn’t understand that glory would follow suffering.
**In contrast, many of us in this realm forget that He will return in glory and terror
He will come to right wrongs, to establish justice, to personify Truth & Righteousness
Jesus is coming again to deliver the righteous and to judge the wicked
He will return to bless the believers and curse the unbelievers
**We will all stand before God (Rom 14:12) to give an account to our Creator – sobering

If you do not have assurance this morning that Jesus is your Savior – that you are among His children, I urge you to trust in Him – as God – as Lamb who gave himself for your sins. Do not leave this room without letting that truth grasp your heart, without your heart grasping them.

Too many will go to hell with good intentions, believing that their good was good enough. Far too many will stand before God and think that knowing about Jesus was enough – and they will not stand in the judgment. Believing in Jesus will not get you to Heaven… the Demons believe in Jesus! You must believe in who He was and what He did… that He did it for you because you needed it (Romans 10:9). How many will not pass the test because they merely agreed in their heads and never apprehended in their hearts?

If you are a Christian, then allow these three truths to sink in and to transform you…
Jesus is God of all Gods
Jesus was the only Sacrifice for our Sin
Jesus is Coming Judge

Trusting them, they will give you hope, they will sober you, and they will assure you in the midst of trial and weariness.

These disciples sat down to eat and Jesus blessed & broke bread (crazy bread?)… their eyes were opened to his real identity! Then he disappeared… and they spoke of their holy heart-burn – then they ran to tell others!

I don’t know what you are listening / reading today – but I’m praying that the Bread of Life is what you leave with… I pray that He consumes your attention & captivates your affections – so that you will burn inside and then run to tell others!