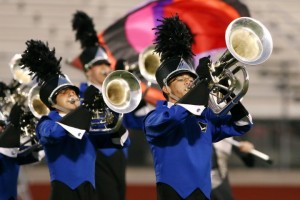 It was late in the third quarter, we’d lost our momentum, and we were down by 4 after having a good lead at the half. That’s when I heard it… the school band!  They had been playing the whole game, but that’s when I realized how important they really were.  At that moment I enjoyed them, but I also felt sorry for them.  All of us wearing blue and black had the wind knocked out of us by the other team – yet they were having to suck it up and play despite their emotions.  We were all spectators to the sad event, but they were still playing with all their hearts.  Why? It’s their job to lift the crowd, to lead our spirits, to get us back in the game – even when they didn’t feel like it.

If you have a pastor or spiritual leader, mentor, teacher, or counselor – I want you to think of them for a minute a little like that band.  When you get the wind knocked out of you, who is there to help you and lift you up?  Who is still actively participating while you’re just spectating? Even when they don’t feel up to it, who is it that sings into your life?  My heart goes out to those who encourage others, even when they themselves are so discouraged they have trouble believing.  I know, I’ve been there.

When the game was over, the score didn’t matter – because the band had captured my attention. I felt both gratitude and pity.  Thank God for the band – thank God for the Encouragers.  And don’t take that person – or those people who make a difference by keeping you in the game – for granted.  Take time today to give your band a pat on the back. Take a minute to jot a note or make the call to encourage your encourager!

Let him that is taught in the word communicate unto him that teacheth in all good things.
– Galatians 6:6

BTW – you can visit our band site here… Thanks SCHS Band!