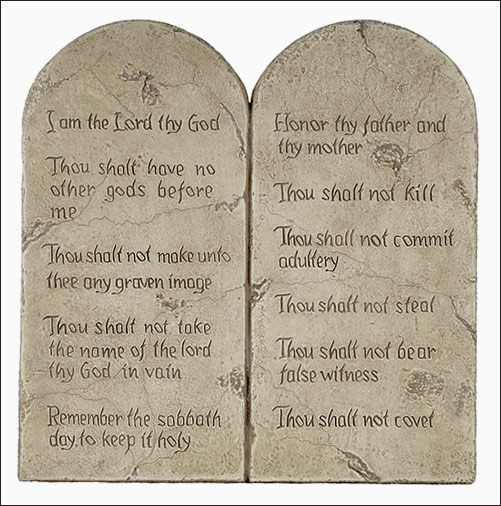 Too many people today, even Christians, feel like the days of grace and spiritual liberty should erase the law of God.  If any minister or church preaches or teaches the laws of God as good, they are labeled as old-fashioned, cult-like, or legalistic.  Since when did ‘legalism’ (the idea of abiding by laws and living by governing principles – as opposed to relativism / anarchy) become a negative adjective?  Below is a clipping from a recent media outlet (Washington UPI) —about how things can get turned around…

More and more, law enforcement officials are coming around to the conclusion that the only way to reduce the crime rate in America is to make everything legal.  Moves in various parts of the country to decriminalize marijuana are illustrative of this approach. If adopted nationwide, proponents claim, decriminalization would produce a dramatic decline in the number of arrests for illegal pot possession.

There is also talk of employing the legalization technique to stamp out violations of laws against pornography, prostitution, gambling and assorted other vices. One of the leading advocates of decriminalization is an organization called Less Lawlessness Through Less Law (LLLL).

“Hiring more policemen, imposing curfews, building new prisons, enlarging the judiciary—these measures only treat the symptoms of the crime wave,” Bargood Fie, a LLLL spokesman, told me.  “If we’re ever going to have a genuine improvement in the situation we’ve got to attack the root cause of crime—the laws.”

This article deals with the fact that God’s law (from Moses to Christ) is good and that its continued presence in church and culture is right, not wrong.  The simple truth is that far too many Americans desire a life without any laws or rules at all – and this has bled over into the church! Laws are not evil.  Rules aren’t sinful or morally wrong, so why the revolution in the church away from anything that has the resemblance of ‘legalism’?

Romans 7 deals exclusively with the believer’s relationship with God’s law.  In order to get the full message of this passage, you must also see the context of chapters 6 (victory) & 8 (blessings).

1. The Law & the Loopholes    (1-6)
– Paul uses the illustration of marriage to convey our relationship to the law (the death of the spouse releases from the binding of marriage vows; even so the death of Christ releases believers from the bondage of sin)
A. Law has dominion over those under it, to those who submit themselves to it (1)
B. God hates divorce, adultery, etc – physically & spiritually (2-3)
C. God offers a marriage with us (new covenant) because of Christ’s resurrection (4)
D. God delivers from sin’s condemnation and the law’s penalties — to the end of free-will service (5-6)

law of sin in my  members —”The law which I see “in my members” is the constant tendency which I notice in them to sin, whenever exited by sinful objects.”

** What happens when laws conflict???

PS – I don’t think rules are the problem, nor do I believe them to be the answer.  Politically, I am neither anarchist (no government) nor ultra-democrat (big brother).  Spiritually, I am neither legalistic (in the sense of believing adherence to regulations can gain ground with God), nor am I liberal (believing that whatever goes with God).

God doesn’t free us from sin so we can live like we want, He frees us to live as we ought!  The best form of government is self-government.  If each of us would see the law of God written in our hearts,  we wouldn’t need the external laws of government or the Bible.  Even if that doesn’t happen during this age, we have hope and a promise of that happening in the next: Ezekiel 36:22-28.